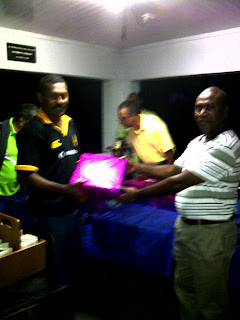 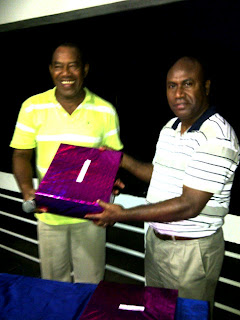 One of the former household names in the world of 7’s rugby in the mid 80’s has recently being making headlines in golf at Vatuwaqa. He is none other than Viliame Raululi, who won the Basic Hygiene (Fiji) Ltd. sponsored stableford event at the Fiji Golf Club on Saturday. Raululi, 42 points on countback won the first prize in A grade from Haroon Ali, who collected the second prize. The third place in the A grade was won by Nigel Goundar, 41 points.

The men’s B grade was won by Gurd Mar, 44 points, while Francis Chung, 42 points, and Sanjesh Ram, 41 points on countback won second and third prizes, respectively in their grade.

The nearest-to-pin on the fifth hole was won by Steve Jones, while Roy Ugra won the sixteenth hole.

B Nair, Steve Jones and M Buksh had all won two balls each for other-best-scores category.

FGC would like to thank Basic Hygiene (Fiji) Ltd. for the sponsorship.
Posted by Fiji Golf Club at 4:31 AM